Son Gets Angry During Sports My son (who is going on 11 years old) is good at sports and enjoys playing. He has potential but he frequently gets angry and subsequently shuts down.

This is starting to cause problems with the children at school. When he plays on a team that does not primarily consist of kids from school, he is fine, but otherwise, he starts playing too aggressively and eventually gets angry because calls are being made against him.


He also has had issues with several boys in his grade who tease and chastise him. One child has being bullying him for years and when I brought this to the attention of the school, they turned it all on my son. When this other boy is in the vicinity of my son, my son's behavior changes and it impacts how he plays. This is becoming difficult to manage and now the boys in schools are starting to talk.

I think most boys no longer want to play with him outside of school because of his anger and "meltdowns" and I think the coaches will start not putting him on their teams. His father helps coach the teams my son plays on but that has been a problem where they wind up shouting at each other and I have to intervene.

I am there for my son as much as I can be. I go to his games if there are no conflicts with any other activities and I am always there to cheer him on and pick him up when things go bad. We have had many conversations about his behavior and there have been a couple of parents who have stepped up and told him in a nice way that the boys on his team are tired of his behavior.

I am looking for advice or guidance on how to better manage him before he becomes a teenager and he is left out of everything and alone because no one wants to deal with him.

Hello Chris, and thanks for telling your story here. I can see that you're facing some significant challenges with your son. I will try to help.

One thing caught my attention in what you wrote about your son and his father. I don't know if you're still married to his father, so I'm not sure this fits. You said that they sometimes get into a shouting match with each other, and then you intervene. I encourage you to avoid doing this, and let the two of them work it out. His dad will always be his dad, and they have to work things out in their own way.

Talk to your son about your marriage (or divorce if you're divorced). Explain to him that the problems are not his fault, and have nothing to do with him.

I don't know if the above applies to your son's situation, but it's worth your consideration either way.

There is nothing wrong with your son. His anger is there for a reason, and your job is to figure out what that reason is. I encourage you to spend time with your son, in a relaxed atmosphere, and see what he tells you about his anger. In a non-confrontive way, ask him why he's angry, and give him time to answer. If it feels appropriate, show him these imagery techniques for positive mental rehearsal. He can use these tools to mentally rehearse good performance and interactions with his fellow students and athletes.

I also strongly encourage you to check out the audio program below. You can listen to free previews right away, and get your copy through download or buying the CD. 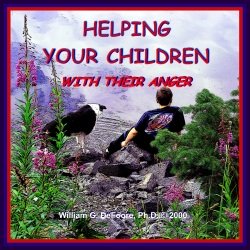 Believe in yourself, Chris, and believe in the best of your son. See him, in your mind's eye, doing well and getting better. Every time you think of him, think of the best of him. Trust him to work things out for himself, and learn from his experiences. And trust yourself to make the best decisions going forward, to insure your son's well being and health.

P.P.S. If you got something of value here, we would also greatly appreciate it if you would provide a written testimonial and/or click the "Like" button at the top left corner of this page.

Join in and write your own page! It's easy to do. How? Simply click here to return to Teen Anger Stories.