13 Yr Old Step-Son And His Father Are Both Angry My step-son has been acting out a lot, and we are at a loss of how to handle this. He is 13 years old, has a hearing disability, and does not speak English fluently although he has a pretty good working vocabulary (he is French).

His mother died 4 years ago of cancer, and he watched her get ill and pass. His father and mother were not married at the time, and when she passed away, his father (now my husband) gained custody of him. A couple of years after this happened, his father was put in jail for 2 weeks for a minor infraction, during which time the maternal grandfather got custody of him.


After he was released, he tried to get custody back, but it has been a long 3 year battle. We do have custody of him now, and he has since moved to the US to live with us. The problem that we are having is that he now blames his father for not getting him sooner, for his mothers death, and pretty much everything else.

There have been some heated arguments between my husband and step-son, and hurtful things are said by both of them. The latest is that my step-son told his father that he is a terrible father who does not love him or he would have come sooner, etc. The grandfather told some untruths to my step-son, and the child believes it all.

We have worked so hard to reunite the two of them, and to have a stable, loving home for him, but he just keeps attacking and bringing up the old hurts. He says he hates his father for many reasons: he drinks alcohol (not a lot), he called him a bad name (during an argument), he called his mother a bad name, so on and so forth.

I am not excusing what my husband said, but he did apologize for everything, and has tried to make sincere amends since then. We don't know what to do, and I don't want this child to hurt himself or anyone else. He said he will stop working in school and doesn't want to do anything we say at all.

We need help, but I am not sure this is the right place.

Hello, and thanks for telling your story here. I can certainly see why you and your husband are so concerned about your step son's behavior. I will try to help.

I know that what your step son is saying is very hurtful. However, I think the bigger issue is that he is being disrespectful to his father. Teens out of control with their behavior are usually very verbally abusive to their parents, and yet the focus needs to be on their bad behavior rather than on the actual content of what they're saying.

I also strongly encourage you to check out the audio program below. You can listen to free previews right away, and get your copy through download or buying the CD. 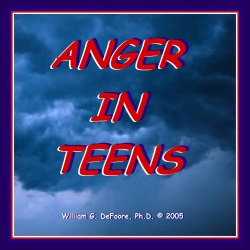 You may also want to read the following pages designed to help parents with problem teens:

The important thing to remember here is that there is no one answer, and this is not a simple or easy process. It has taken a while for your step son to learn that he has the right to be disrespectful and hurtful to his father, and it will take a while for your husband and you (primarily your husband) to teach him that he absolutely must treat both of you with respect if he wants to have any privileges whatsoever.

You're not doing your step son any favors by allowing him to have this freedom to be abusive to his father.

Please ask your husband to read this as well, and the two of you decide together what to do. There are many good and effective options for you here.

Join in and write your own page! It's easy to do. How? Simply click here to return to Teen Anger Stories.